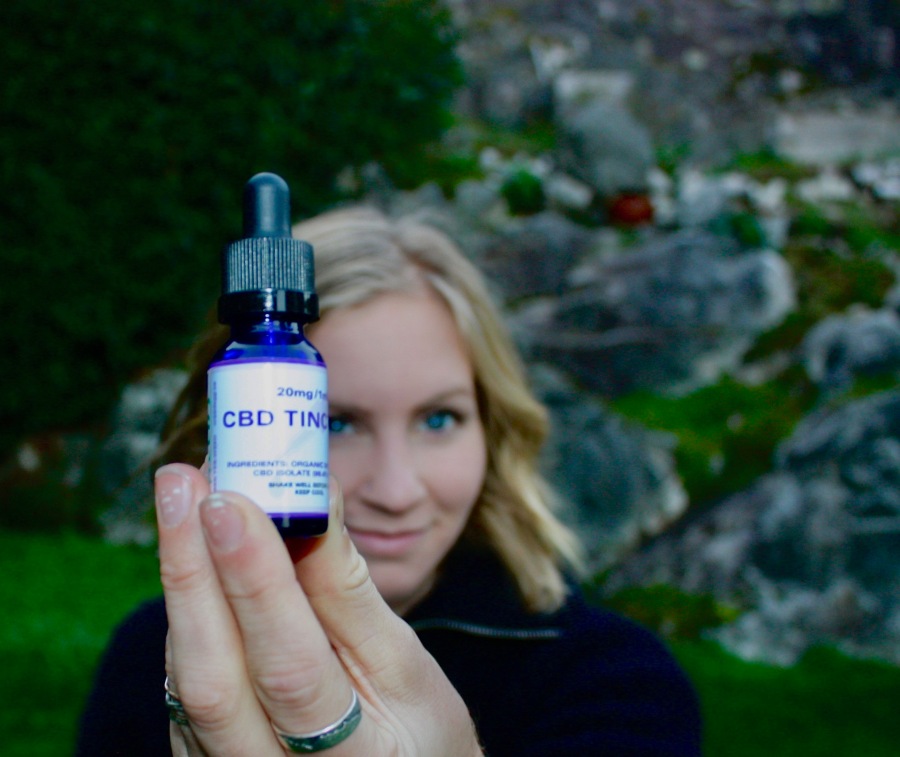 What the heck is the deal with CBD? I hadn’t even heard of CBD until about a year ago, and now I feel like it’s the talk of the town. Before beginning my research for this post, here’s the intel I had on CBD:

Aaand that’s about it. I didn’t even really understand if it was legal or not in Canada!

So, as Big Day (Legalization of Marijuana Day in Canada) rolls around today, I wanted to get the scoop CBD.

Here is a quick and dirty FAQ to start us off:

CBD, short for cannabidiol, is a molecule found in abundance in the marijuana plant. The other molecule you have probably heard of is tetrahydrocannabinol, or THC.

Nope, not if it’s separated from its THC sister. It’s THC that’s responsible for the psychoactive properties of smoking or ingesting marijuana.

Most products that contain only CBD are in oil form. These oils can be ingested, absorbed under the tongue, or applied directly to the skin.

As of October 17, 2018, cannabis products are legal in Canada. CBD falls under the Cannabis Act. All the regulations around consuming, producing, and selling CBD are pretty much the same as they are for any other marijuana product.

That’s the nuts and bolts, but it leaves me with two more questions:

These ones are a little more complicated. I’m going to need to back us up a little first.

(Or, if you’re strapped for time, click here to skip to the verdict).

How do we get high?

Every cell in our body has a whole bunch of receptors that, when activated, trigger the cell to do a specific job. Imagine that a human cell is a vending machine filled with all sorts of snacks. The vending machine just waits idly until someone comes and tells it what snack to drop by putting in some cash and entering a code that corresponds to the snack they want. In terms of our cells, it’s the chemical messengers that come around to press a specific code (to activate the receptor). Each chemical messenger knows a different code, or activates a different receptor. The codes produce different actions depending on which kind of cell the receptor is attached to. It’s as if there were vending machines full of drinks and snacks side-by-side. You can enter the same code into both machines, but the treat that pops out the bottom will be different.

THC is like a sneaky kid who stole their dad’s wallet, knows the CB1 code and wants as many snacks as they can get.

Many of our brain cells (neurons), have receptors called cannabinoid receptors 1 (CB1). CB1 receptors cause a whole bunch of different reactions – including regulating mood, pain, fear, and hunger, — depending on which type of neuron they are attached to. Our body has messengers that trigger the CB1 receptors to cause the desired reaction. When the chemical messenger has produced enough snacks at our cellular vending machine, it stops pressing the its code, walks away, and the reaction goes away.

THC is like a sneaky kid who stole their dad’s wallet, knows the CB1 code, and wants as many snacks as they can get. When THC comes in contact with your cells (after you smoke a joint or eat a brownie you found in the freezer labelled ‘extra special’), it triggers the CB1 receptors in lots of different types of neurons. The result is mood changes, increase in appetite, and changes in fear response. These are all changes associated with getting high (the psychoactive properties) from marijuana.

CBD works differently. You see, CBD doesn’t fit into the CB1 receptor – it doesn’t know the CB1 code to our cellular vending machines. But, it still causes a change in the reactions of different cells, albeit less drastic changes than THC. Scientists don’t really even know how CBD works, but there are a few different proposed mechanisms.

It is probable that CBD is a negative allosteric inhibitor. Let me put that in snack terms for you: CBD erases the numbers off the keypad of the vending machine, making it harder for our body’s natural chemical messengers to punch in the numbers and pop out a snack.

So CBD can’t make as drastic of changes as something like THC, because it cannot continually press a code. In fact, it can’t press any of its own codes—it can just make it harder for another chemical, like our self-produced chemical messengers, to do their job. But it seems that these indirect changes to our brain chemistry, while they don’t make us high, have significant effects that scientists can measure.

Not a lot to go on

Nevertheless, in July of 2018, two drugs containing CBD were clinically approved in the United States to be used a therapy for two very rare forms of epilepsy in children.

CBD is shown to reduce the seizure frequency by about 30% in approximately two thirds of patients that have this Lennox-Gastaut syndrome or Dravet syndrome. The approval of a CBD drug was fast-tracked (that means the clinical trials were shorter and less rigorous) because there are no other treatments available for the condition.

Of course, there is also a lot research happening on the role of cannabis and THC as a therapy for many of the same conditions. Indeed, medical marijuana has been legal in Canada as a therapy for pain management since 2001. However, using THC as a therapy can come at a cost: it makes you high, can increase your heart rate, and can make you anxious.

CBD doesn’t have these side effects. There is even some pretty strong evidence that supports the claim that CBD can reduce anxiety.

When we see something frightening or potentially dangerous, our nervous system launches a response that causes all sorts of changes in our brain and body–increased heart rate, clammy hands, that pit in your stomach. It happens to everyone and it’s totally normal. But sometimes, our fear response doesn’t turn off, or it goes into overdrive and those chemical messengers stick around and keep manically pressing the codes on our vending machines. Very generally speaking, this is anxiety. If we can diminish the fear response; we might be able to reduce anxiety.

When scientists feed CBD to human cells (in petri dishes) or rats, they see that the fear response associated with anxiety goes down compared to cells aren’t fed CBD. There haven’t been many studies in humans, but one Brazilian research group found that people who took CBD before a public speaking event were less anxious than speakers who were given a placebo.

However, there are still huge knowledge gaps in the role of CBD as an anti-anxiety therapy (the fancy word for this is anxiolytic agent). First, people still don’t really understand how CBD is making these changes in the brain, even if we have some strong guesses.

More importantly, there haven’t been any long-term studies to determine what happens when people take CBD daily to manage their anxiety over a long period of time. There is a possibility that CBD could become less effective in treating anxiety the more you take it, and could even result in permanent negative changes in the way that your brain works over time.

Finally, there isn’t any standardized dosage recommendations, so the quantities of CBD that people are taking may vary greatly from the amount that has been proposed as safe or effective.

So what about reducing pain? I see lots of influencers who endorse using CBD cream to reduce pain in joints and muscles. My own grandfather swears it helps his creaky knees and gets him through 18 holes on the golf course. Indeed, marijuana has been used for pain management, but whether the CBD compound alone can reduce pain is relatively unknown. The small bit of evidence that exists does suggest that CBD reduces the feeling of pain when it is used as a topical ointment on sore muscles (my Poppy may be on to something!). But how CBD reduces pain is still unknown: it might be by reducing inflammation, so that our body stops sending the signal saying “ouch this hurts” (this has more to do with inflammation and cannabinoid receptors on our immune cells); or it may be by telling our neurons to ignore the messenger that registers pain.*

There’s a perception that CBD is safe to use as a treatment for anxiety and pain because it doesn’t get you high. But CBD does affect our brain chemistry, so it shouldn’t be used willy-nilly.

However, just because there isn’t very strong evidence to support CBD as a pain reliever doesn’t mean that CBD doesn’t work. The research just hasn’t caught up with the CBD fad yet.  For now, I would say that the jury is still out on whether CBD works as a pain reliever.

But is CBD safe to use?

There’s a perception that CBD is safe to use as a treatment for anxiety and pain because it doesn’t get you high. But CBD does affect our brain chemistry, so it shouldn’t be used willy-nilly.

An over-the-counter drug like acetaminophen (Tylenol) isn’t going to get you high either, but I don’t think any of us would consider popping as many of those pills as we want just because they won’t give you the munchies. Non-prescription drugs like acetaminophen must have dosage information and side effects listed on their labels. Additionally, their safety and quality is rigorously tested and approved before the reach the shelves.

However, CBD isn’t regulated the same way an over-the-counter drug is, because products like CBD oil are considered a recreational substance, not a therapeutic one under the new cannabis laws. The reality is that there is still very little research on the risks of overusing CBD products, and even less research that investigates the long-term effects of using CBD.

Probably! But the research is still emerging.

I’m not sure, and neither is the greater scientific community.

From a scientific-evidence perspective, the jury is still out (sorry for the disappointment).

Here is my informed opinion: we should be wary when using CBD products, especially when using them consistently or in large amounts. It’s true that CBD may have incredible healing benefits, but there just isn’t enough evidence out there to be sure yet. Just because it doesn’t get you high, doesn’t mean it couldn’t have lasting negative effects.

As of October 17, 2018, under the new Cannabis Act in Canada, companies that sell CBD aren’t allowed to advertise false or unsupported claims about their products. But in the US sneaky CBD companies have found a way around similar laws, and they likely will here too. They do it by providing samples to popular Instagrammers and asking them to post reviews. Some CBD companies provide a commission on the sales to their promoters. These social media influencers can say whatever they want, including endorsing CBD products, without any accountability landing on the cannabis companies that provided the samples and commissions. Often, the claims these influencers make are based on their personal experience or are unsupported claims. I guess I’m just saying, be critical of the information you see and try your best to be an informed consumer!

Hey there! I love health and science. This is a place where I explore the intersection between the two.